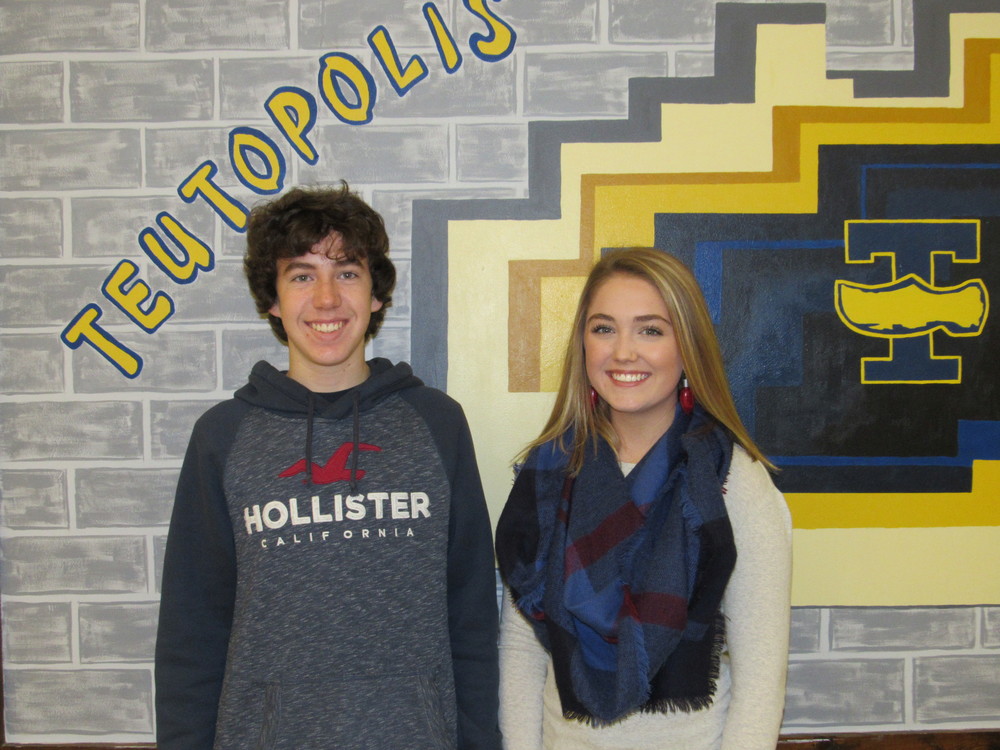 Nick Tensen and Emma Ruholl were named the Teutopolis High School Rookies of the Month for January.  They were nominated by their teachers and then selected by a team of faculty members in recognition of their active participation in school activities, their academic efforts, and their kindness and respect of others.

Nick Tensen, the son of Nick and Kathy Tensen, is a sophomore at THS.  He has several leadership positions: the secretary of his class, the secretary of the Robotics Club, and Officer at Large in the Spanish Club. Nick is also the Assistant Senior Patrol Leader for his Boy Scouts Troop. In addition, Tensen is a member of the THS Student Council, Math Team, Teutopolis Math League (TML), WYSE, Art Club, Drama Club, Band, Bridge Club, FFA, Internet Society, Robotics Club, and Spanish Club. He is also involved in Boys Scout and his church’s Youth Group.

Tensen has received the Algebra II and Physical/Chemical Science Awards. Nick has been on the High Honor Roll for every quarter of his high school career.

When Nick has free time, he likes to read, play musical instruments, watch a movie, or hang out with his friends. He also spends some of his time raising chickens.

Nick plans to study engineering, and for a fun challenge, he might like to write and hobby farm on the side.  He intends to travel whenever he can.

When Tensen was asked about who or what motivated him to succeed, he replied, “My family is a major motivational factor, along with knowing that if I try my hardest, I can accomplish anything. Those help push me to succeed. It might be easy to think that the world is reaching a peak in advances today, but isn’t that what people have always thought throughout the past? There will always be something new waiting for us.  All we need to do is grasp it.”

Emma Ruholl, the daughter of Jason and Stacey Ruholl, is also a sophomore; she has been a member of the THS Student Council and Volunteens for two years and Spanish Club and Teutopolis Math League (TML) for one year. Emma has also been a THS cheerleader for two years.

Emma has been on the High Honor Roll every quarter during her high school career. Tumbling, reading, trying new foods, and hanging out with friends are her hobbies.

Her future plans include going to medical school to become a pediatrician.

Emma is motivated to succeed by her mom and dad. She says, “They show me how to work hard and find time to relax and have fun.”