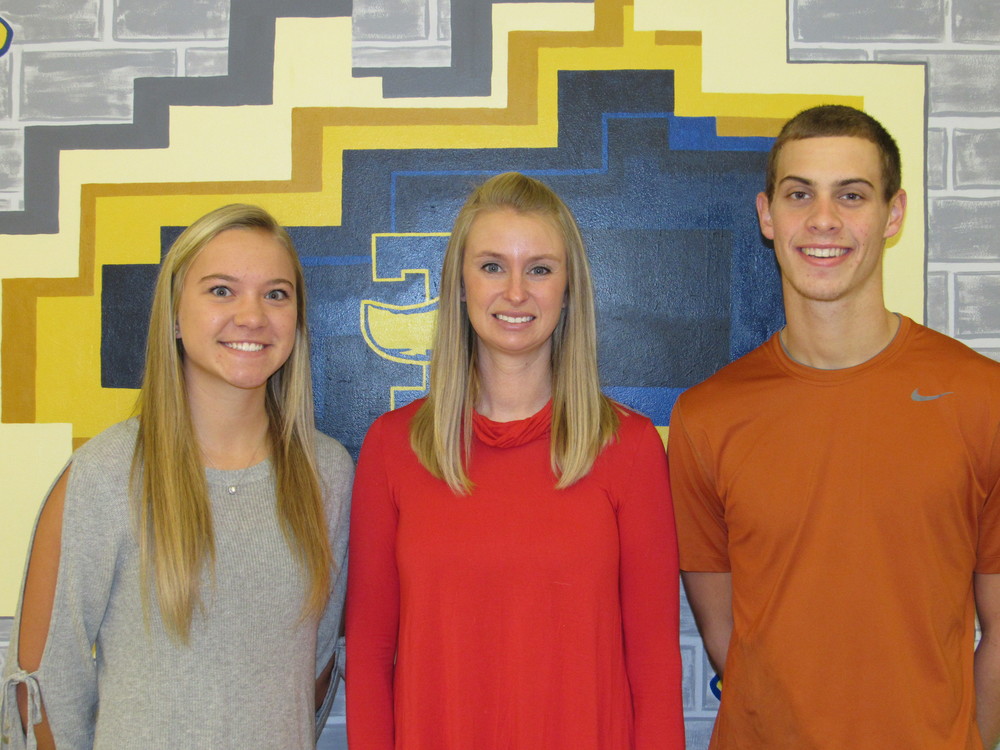 The Students of the Month for January at Teutopolis High School were recently named, and they are Lauren Hemmen and Lee Hardiek.

For each month during the school year two upperclassmen are nominated by their teachers and then selected by a committee of faculty members based on their participation and their dedication to Teutopolis High School.  In addition, these students have done well in either academics, sports, leadership, and/or extracurricular activities.

Lauren Hemmen, daughter of Tim and Linda Hemmen, is a senior class officer and a member of the THS Student Council. She is a member of several students organizations: Student Council, Volunteens, Math Club and Math Team for four years; National Honor Society and Varsity Club for three years; and WYSE for 1 year.

Lauren has been a member of the varsity tennis team and the softball team for all four years of high school; she played basketball for 2 years.

Hemmen was recently named an Illinois State Scholar and has been on the High Honor Roll for every quarter of her high school career. In addition, Lauren was named Rookie of the Month during her sophomore year.

Her hobbies include spending time with friends and family, playing softball and tennis, and enjoying time outdoors, especially swimming in the summer.

Lauren plans to go to college to obtain a degree in either accounting or finance.

When asked who or what motivates her to succeed, she replied, “Seeing all of my hard work pay off, along with the encouragement from friends and family.”

Lee Hardiek, son of Jeff and Cindy Hardiek, is also a senior at THS. He is a captain of both the basketball and baseball teams. Lee has also been a member of the National Honor Society and the Varsity Club for three years.

Hardiek has played baseball and basketball for four years and has a member of the bass fishing team for one year. Lee was a member of the 2017 2A State Championship Baseball Team and has received the following athletic awards: 2016 Fall Pitcher of the Year, 2017 3-Point Percentage in Basketball Award, and the 2017 MVP of the Lawrenceville Capital Classic basketball tournament. In addition, Hardiek has received the following academic awards: Algebra I, US History, Industrial Ed Orientation, and Basic Electronics. He was a Rookie of the Month and has made the High Honor Roll for every quarter of his high school career.

Lee’s hobbies are deer and turkey hunting, fishing, sports, and hanging out with friends and family. Next fall he will be attending Lincoln Land Community College on a baseball scholarship. Then he plans to transfer to a four-year university to obtain a degree in electrical engineering. Following that, Lee would like to settle down with a family in Teutopolis and buy a lot of hunting ground.

He says, “My faith and family motivate me to never give up. Also, past and current teachers and coaches have challenged me to push myself to be the best student and athlete I can possibly be.”